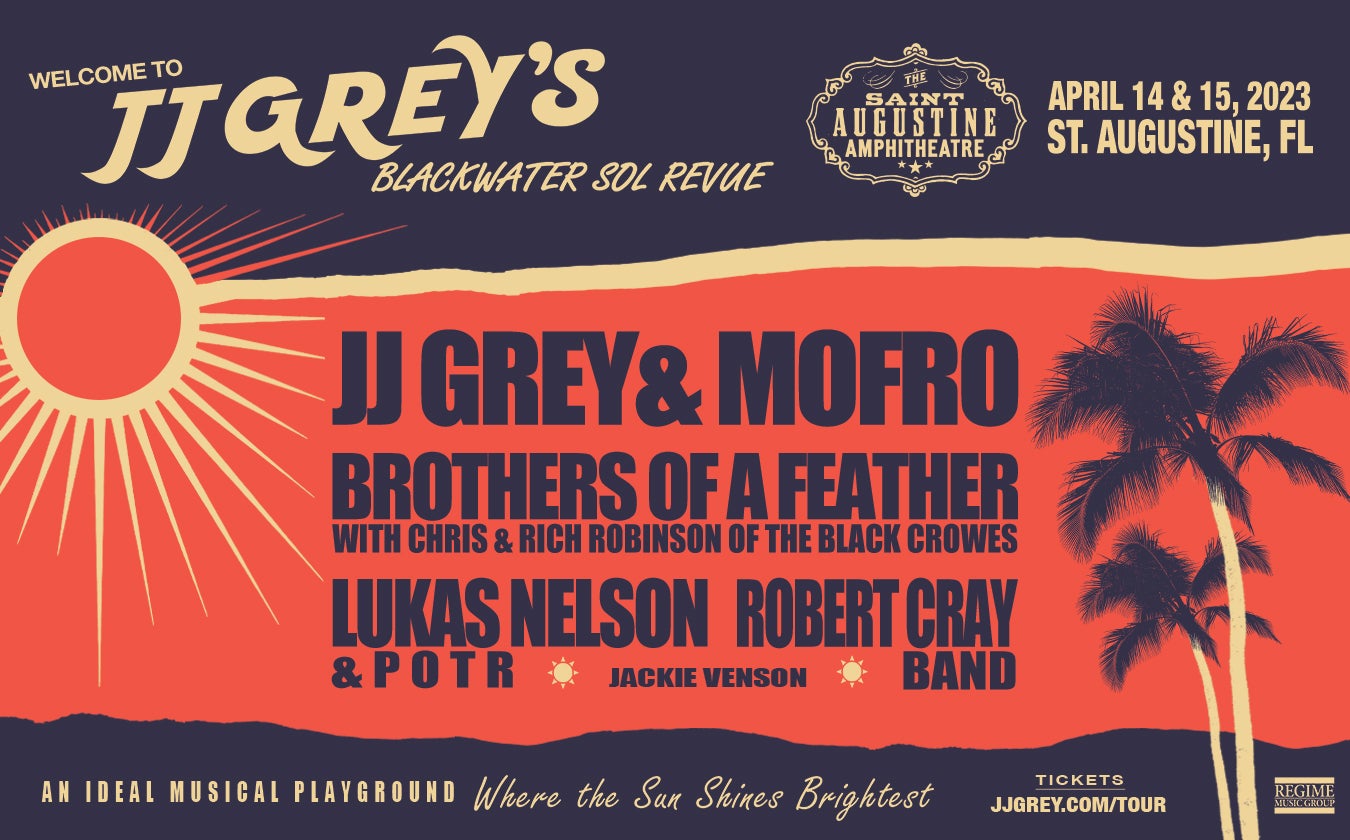 Lineup Includes: JJ Grey & Mofro, Brothers of a Feather with Chris and Rich Robinson of The Black Crowes, Lukas Nelson & Promise of the Real, Robert Cray Band, and Jackie Venson.

Single-Day tickets are available for purchase at the links above.

Two-Day tickets are available below:

A limited number of VIP upgrades are available and include:

JJ Grey, the North Florida sage and soul-bent swamp rocker is headlining the festival with his band, Mofro, and curating the festival lineup. Born and raised in Jacksonville, the farms and eddying swamps of his youth are as much a part of Grey’s music as the Louisiana swamp-blues tradition. His presence before an audience is something startling and immediate, at times a funk rave-up, other times a sort of mass-absolution for the mortal weaknesses that make him and his audience human. When you see JJ Grey and his band Mofro live—and you truly, absolutely must—the man is fearless.

Under the moniker Brothers of a Feather, The Black Crowes, Chris and Rich Robinson, give fans a rare opportunity to see them perform stripped down versions of some of their classic songs. In 1990, when journalists were lamenting the death of rock, as cheesy pop and hair metal dominated the charts, Atlanta’s Black Crowes gave the genre a swift and much needed kick with Shake Your Money Maker. Fueled by singles “Jealous Again,” “She Talks To Angels,” and the break-through cover of Otis Redding’s “Hard To Handle,” the band immediately took the rock world by storm, topping Rolling Stone’s “Best New American Band Readers Poll” in late 1990. The Black Crowes went on to release eight studio and four live albums, selling in the tens of millions along the way.

Lukas Nelson & Promise of the Real

Bassist Corey McCormick, drummer Anthony LoGerfo, percussionist Tato Melgar, and multi-instrumentalist Logan Metz have wowed audiences and won fans with their fiery stage performances and singular sound, which smoothly straddles rock and roll, country, soul, folk and R&B. Since their debut over a decade ago, the band has toured relentlessly, playing countless sold-out one-night shows and festivals around the world, and occasionally serving as Neil Young’s road band. Nelson also co-produced the GRAMMY-winning music for 2018’s lauded A Star Is Born film.

Jackie Venson is a multi-instrumentalist, singer/songwriter known far and wide for her complexly beautiful music and blazing guitar skills. Born and raised in Austin, Texas, Jackie has traveled the world playing to massive crowds both as a headliner and as support for major acts such as Gary Clark Jr, Melissa Etheridge, Aloe Blacc, Citizen Cope to name a few.

Brothers of a Feather with Chris and Rich Robinson of The Black Crowes (7:00pm)

Local performances on The Front Porch of The Amp (5:30pm)

Local performances on The Front Porch of The Amp (4:00pm)

For fans that buy the Two-Day VIP Ticket and want the full festival experience, a limited number of RV and tent camping spots are available to purchase for the entire weekend. Details on how to purchase camping spots will be emailed to ticketholders at the email address provided during the ticket purchase process.

On-site parking is availble for purchase at the links below and must be purchased for each day. Two-day parking passes are not available.